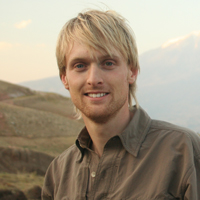 Back in September 2007, Jeremy went on a trip to Dogubayazit in eastern Turkey and Armenia on which I took part as a cameraman for the Ark Hunter film, together with Ashish. Our team existed of people from all countries and nationalities. The different cultures and backgrounds gave us good laughs because of our different views on situations. But even though we were so different, we were a one of a kind team that achieved some great results.

After our team met up in Istanbul after some regular expected unexpected delays and situations, we took an airplane to Van in south east Turkey to where our taxi driver was waiting for us with a sign in his hands reading “Jemy Wailes”. This had to be our guy. We drove for hours across deserted plains, dusty roads and had to pass many militairy chechpoints before getting our first glimpse of the mountain of Ararat. All this time our cranky, fasting taxi driver never said a word and just kept staring in the distance as if we weren’t even there. After our four and a half hour drive, we finally arrived in Dogubeyazit and checked in to our ‘hotel’. The number of stars painted on the building probably meant something else than what we are used to in the west, because the walls were cracked, the bathroom was dirty, and Ashish’ white bed sheets had vivid red blood stains in it. Who knows what he was sleeping on.

The next morning we got up at 04:30 AM to shoot a time lapse of the sun rising over Dogubeyazit. The way the sun rays hit the sand polluted atmosphere was just gorgeous. The whole town lit up with a golden glow. It’s something I’ll never forget.

Later that day Jeremy took a motorcycle for a ride through the wastelands. We came through small villages and drove through deserted areas invested with wild dogs who didn’t really like our presence. The way Jeremy had to keep kicking his feet at their growling faces while they were chasing him and tried pulling him of his bike, made him look like a wild American cowboy on a horse of steel.

Just before the sun went down, I hopped on the back of the bike and tried to snap some nice first person shots. On one occasion I wanted to film Jeremy slightly from the right side and slowly leaned out while trying to keep my balance. But the sand trail we were on was so bumpy and unpredictable that we hit deep sand and suddenly swerved off the road. Before I knew it, Jeremy and I were launched off the bike and tumbled through the air like two beardy princesses in a ballet. I did whatever I could in that fraction of a second to make sure my camera wouldn’t hit the ground before my body did. So I took the hit and kept my camera up in the air the whole time. Luckily, it was still rolling. We didn’t have a scratch, but the fall bent some parts of the bike that weren’t meant to bend. We had a good laugh and returned back to the hotel to have some dinner.

Because we were in Dogubeyazit during Ramadan, we had little food to choose from at the hotel’s restaurant. Even though it was dinner time, the restaurant was empty and we had everything to ourselves. Ashish was still in the hotel room and would join us later. We filled his plate with the same food as we had: some brown soup, salad, chicken and bread which felt and tasted like an old cardboard box from IKEA. The food was disgusting, but we were so hungry, we just ate as if we didn’t eat for days. After a couple of minutes Ashish joined us and started off with the chicken. The chicken didn’t make it into his belly though. Just before reaching his mouth, he dropped his fork and had that crazy look in his eyes.

“Oh man, this fish smells bad..!” he said with his brilliant Indian accent. Jeremy and I laughed and said it wasn’t fish, but chicken. We kept eating. Ashish didn’t.

That night Jeremy and I started getting massive tremors in our stomaches. We ran on and off to the bathroom and even though our bowels were empty, we had to keep making a run for it. I had no idea where it all came from and as expected, we ran out of toilet paper pretty quickly. We tried different remedies to help us relief the pain. But even though Jeremy drank the weirdest tea with a herb from mount Ararat (it literally tasted like earwax) which was supposed to ease your stomache, nothing seemed to work for us. For the next four weeks we had cramps which were nearly unbearable. We lost so much weight and were nearly dehidrated, but kept to our schedule and worked and traveled for an average of 18 hours a day. Looking back at the pictures of how I looked during that period, I’m amazed nobody plucked me off the street and put me into quarantine.

Two weeks later, after we made our way to Armenia, we planned an interview with a priest at a church partially built in the rocks and caves. People from all over Armenia came here on trips and excursions and were scattered everywhere. They were in caves, in the hills and even in the trees.

Because the stomache cramps were so unpredictable and came up out of nowhere, we couldn’t take any precautions. We had been filming around the compound for a couple of hours. It was a hot and beautiful day and everything went without the expected unexptected problems. No problems at all. Then came the interview. Everyone was ready to start rolling when the tremors came up. Oh no, not now… not now! I politely asked the priest if there was a toilet around there because I had some problems with my stomache. He said I I could go to a restaurant down the mountain again, or to a toilet somewhere up in the mountain hills. Well, we couldn’t go back down the mountain again, so my only option was to go to the restroom up on the hill. I excused myself and went up there. But the only structure I could see was a bunker with a single door opening and a window of approximately one by one feet. As I came closer, the smell was getting worse and worse. When I finally stood in the door opening, the smell was unbearable. The bunker was dark and I couldn’t see any further than ten feet. What I saw there made me leave without hesitation. I thought I’d rather cope with the pain. And so I went back to the church again.

But I only came so far. The pain became intense and I was looking for an isolated spot around the church to just pull down my pants and get over with it. But people were everywhere. I laid down on some stairs and tried to keep the pain off my face. I tried to man up, but I couldn’t. After laying down there for ten minutes waiting for the pain to leave, I realized it wasn’t going to happen. I made my way back to the car and tried to sleep it off. But all I did was sweat, getting dizzy and nearly passing out. The pain increased and I couldn’t keep it in much longer. Again I thought of just taking a dump right there. My thoughts were playing with me. Do it! Just get over with it! But right then, when I nearly had the strength and guts to do it, I saw the happy faces of the little kids playing everywhere. I wouldn’t want to ruin their youth by displaying a horrifying image of what I was about to do. No, I couldn’t. I was not going to be that guy that you would only see on surveillance camera videos on the internet. There was just one other way to do it. The bunker.

It was a painful climb up that hill on the mountain again to where the dark bunker was waiting for me. It was as if all this time, he knew I would be coming back for him all along. And there I was, standing in its door entrance to what I would imagine the entrance to hell would look like. I filled my lounges with the last big breath of fresh air I could get and ran in. I made my way to the back of the bunker, where no one outside would see me. The sound of my shoes thumping through the deep layer of feces that covered the whole bunker floor was disgusting. I imagined that if I lit up a match stick right there, the whole place would either blow up, or the thousands of creepers that were silently looking at me would make a run for it, trying to evade any sign of light. Because anything that was in there, belonged to the darkness. I was pretty sure of that.

There I was, standing with my back towards the wall. I made it this far and the only step separating me from a huge relief from the pain was finally here.

I unbuttoned my pants and pulled them down only slightly so it wouldn’t sink into the layer of feces beneath my feet. With a massive explosion I emptied my bowels and spray painted the walls with a nice taint of brown. But then the next problem arose. This wasn’t a restroom and I didn’t have any toilet paper with me either. Nothing, except for the lens tissues I always carry around to clean the lens of my camera. I had no choice but to use it. Lens tissues are so extremely thin that any fluid will pass right through it. I didn’t know this. I wish I did, because I used them. I used them, and everything… went right through it.

Out of nowhere, a huge bug suddenly crawled up to my feet. No time to think! With my messed up fingers I tried to pull up my pants, took a big breath of the most hellish smell I will NEVER, EVER forget and ran outside like a little sissy girl, with my mind unable to procesess the intense experiences I just had. With every step I took, feces splashed up all around me. It would have looked great at 600 frames per second. I tried to forget whatever had just happened.

After the trip was over, I walked around with my illness for weeks before going to the doctor because I nearly couldn’t move my fingers anymore. My knockles were badly swollen rendering my hands pretty much useless. It turned out that all this time I had salmonella due to the fishy smelling chicken. The salmonella on its turn triggered Colitus Ulcerosa, a sister of the Crohn disease, which was, together with the Salmonella, part of the reason for the bowel symptoms I had during and after the trip.

I’m happy to say though, that Jesus the Christ has completely healed me.